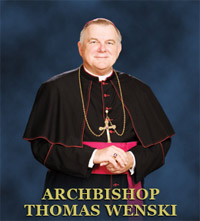 Homily preached by Archbishop Thomas Wenski May 31, 2012 at the dedication of the minor basilica of St. Mary Star of the Sea in Key West.

We gather today, on this feast of the Visitation of Mary, to give thanks for the favor shown to this historic parish church dedicated to Mary, Star of the Sea, to the Key West community and to our archdiocese. We are all extremely grateful that Pope Benedict XVI has seen fit to raise this church to the status and dignity of a minor basilica.

As a basilica, besides the umbrellino and the tinnanabulum, the special umbrella and bells, Mary, Star of the Sea, is granted the privilege to display the coat of arms of Vatican City on its facade and the crossed keys of St. Peter on all its furnishings and liturgical appointments. Having in the Archdiocese of Miami a basilica does underscore the special bond that joins this local Church to the successor of St. Peter. The unity that should exist among those who invoke the name of Jesus – that unity for which Jesus himself prayed – is realized cum Petro and sub Petro: with Peter and under Peter.

In today’s feast of the Visitation of Mary, which was just described for us in the Gospel reading, we see exemplified the sublime greatness of Mary. Before worrying about herself, Mary instead thought about elderly Elizabeth, who she knew was well on in her pregnancy and, moved by the mystery of love that she had just welcomed within herself, she set out “in haste” to go to offer Elizabeth her help. Mary proclaimed with her whole life what she had replied to the angel at Nazareth: “I am the handmaid of the Lord.” Mary’s life has been a gift of self to God and to neighbor. And now Mary in heaven carries out a ministry of intercession on our behalf – ever in communion with her Son. And, in Key West, generations of Catholics instructed in the faith by the good priests and holy nuns who served here, heroically braved isolation, storms and disease by entrusting themselves to Mary and her maternal protection. The Sisters of the Holy Names of Jesus and Mary, especially Sister Louis Gabriel who built the grotto, taught their charges to pray with them the words of the Memorare: “Remember, O most gracious Virgin Mary, that never was it known that anyone who fled to thy protection, implored thy help, or sought thy intercession was left unaided.”

A small plaque with a painted image of Mary recovered from the 1901 fire that destroyed the earlier church built by Father Kirby in 1851 had an inscription written by Father Hunincq that describes perfectly the significance of this parish and the faith that has sustained it over the years: “Since it first shed its light in Key West, it has been like a star of the sea for the wandering mariner; it has been a star of hope and comfort in times of despair and sorrow and a star of joy to those who have lived in its teachings.”

“Blessed are you among women,” Elizabeth tells Mary. Yet, Mary remains the humble maiden of Nazareth: She is not weighed down by pride or selfishness. She never forgets that she is the handmaid of the Lord, nor does she forget the gratuitous goodness of God. That we, too, might not forget, the Church entrusts to us her canticle of praise, the Magnificat, which we pray every evening at vespers.

“My soul proclaims the greatness of the Lord.” Mary recognizes God’s greatness. This is the first indispensable sentiment of faith. It is the sentiment that gives security to human creatures and frees from fear, even in the midst of the tempest of history.

This song of Mary, her Magnificat, is, in the words of Pope Benedict XVI, “an authentic and profound â€˜theological’ reading of history: a reading that we must continually learn from the one whose faith is without shadow and without wrinkle.”

Going beyond the surface, Mary “sees” the work of God in history with the eyes of faith. This is why she is blessed, because she believed. By faith, in fact, she accepted the Word of the Lord and conceived the Incarnate Word. Her faith has shown her that the thrones of the powerful of this world are temporary, while God’s throne is the only rock that does not change or fall.

With the eyes of faith, we too can see the work of God in the history of this state and this city. We see it in the short-lived mission of the Jesuits in Upper Matacumbe Key in 1568; we see it in the early 1700s when Cuban fishermen living here in Cayo Hueso were attended to by priests traveling from Havana 90 miles away. We can see it in the 1820s in the Catholic faith of Stephen Rustle Mallory and his mother – and he, a graduate of Springhill College, would later write his son at Georgetown, urging him to “cling to your religion, my son, as the sheer anchor of life here and to come. Never permit yourself to question its great truths, or mysteries. Faith must save you or nothing can; and faith implies mystery.” With the eyes of faith, we can see God at work when Mass was celebrated in City Hall in 1846, and when Father Kirby built the first Mary Star in the 1850s.

Mary’s example of readiness and generosity in the service of others, seen in her visitation of Elizabeth, has been imitated by the selfless and generous service of the priests who died of Yellow Fever while ministering here in Key West. Her example has been imitated during the century-long presence of the Sisters of the Holy Names of Jesus and Mary in teaching the young and in ministering to the sick and wounded during the Spanish-American War.

As the Second Vatican Council taught, Mary is the Mother of the Church and is, therefore, the model for us as we try to live our Christian vocation in the world. This Basilica of St. Mary Star of the Sea, the southernmost parish of the United States, stands as a beacon of faith, hope, and love. It stands as an invitation written in brick and mortar to all who visit this community – an invitation to trust in God and to imitate Mary in what she herself said: “Behold, I am the handmaid of the Lord. May it be done to me according to your word.”
Yes, as Pope Benedict says, “Her Magnificat, at the distance of centuries and millennia, remains the truest and most profound interpretation of history.” For all human history – without faith – is incomprehensible. As the Pope writes in Spe Salvi, “Human life is a journey. Towards what destination? How do we find the way? Life is like a voyage on the sea of history, often dark and stormy, a voyage in which we watch for the stars that indicate the route…Holy Mary, Mother of God, our Mother, teach us to believe, to hope, to love with you. Show us the way to his Kingdom! Star of the Sea, shine upon us and guide us on our way!” (Pope Benedict XVI, Spe Salvi)