Designation as a Minor Basilica

As a basilica, besides the umbrellino and the tinnanabulum, the special umbrella and bells, The Basilica of Saint Mary Star of the Sea is granted the privilege of displaying the coat of arms of Vatican City on its facade and the crossed keys of St. Peter on all its furnishings and liturgical appointments.

Having in the Archdiocese of Miami a basilica underscores the special bond that joins this local Church to the successor of St. Peter. 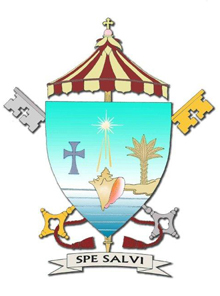 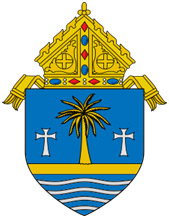 The crossed keys symbolize the keys of St. Peter the Apostle. The keys are gold and silver to represent the power of loosing and binding.

The triple crown (the tiara) symbolizes the triple power of the Pope as “father of kings”, “governor of the world” and “Vicar of Christ”.

The gold cross on a monde (globe) surmounting the tiara symbolizes the sovereignty of Jesus.

A circular mosaic of this image is located in the tympanum (the vertical recessed triangular space forming the center of the arched pediment) above the portico of the Basilica.

Star of the Sea Coat of Arms

The coat of arms of the Minor Basilica of Saint Mary Star of the Sea incorporates key elements reflecting the nature of our parish.

The position of the sand indicates that this parish was the beginning of the Archdiocese of Miami and is at the end of it.

The conch shell is the traditional symbol of Key West.

The Star above the conch shell is for our patroness, and above the ombrellino the cross stands on a conch pearl.

Pope Benedict XVI concludes SPE SALVI with a comprehensive reflection on our Patroness, Stella Maris, Mary Star of the Sea.

The palm tree in gold bespeaks the territory of the archdiocese, where this tree grows plentifully and luxuriously, so much so that it is practically a symbol of this area.

On a field of blue, the hue of the sky, the tree issues from a golden fess or horizontal bar between two silver crosses, as emblems of the Catholic faith.

The base of the shield displays wavy and silver blue bars, the heraldic equivalent of water, to signify that the See City (of the Metropolitan Province of Florida) is encompassed by water.

A square mosaic of this image is located on the front facade of the Basilica, under the portico, to the right of the main entrance

The ombrellino (Italian), umbraculum (Latin), means “little umbrella” and was once used on a daily basis to provide shade for the pope. Now it is a symbol of the Roman Catholic Church and the authority of a pope over it. Whenever a pope visits a basilica, its ombrellino is opened. It is one of the honorary symbols of a basilica and may be used in the basilica’s coat of arms, and carried in processions by the basilica’s canons.

The ombrellino is normally made of alternating red and gold fabric and is usually displayed in a partially unfolded manner. The eight-segment umbrella is 2′-6″ wide and 3′ high. The support pole is standard gauge and 8′ in height, 3′ fall within the umbrella

The eight-lambrequins, or pendants, can have different seals commemorating unique aspects of a particular basilica. In the case of Saint Mary Star of the Sea, these include the seals of Pope Benedict XVI, Archbishop Wenski, the Archdiocese of Miami and the Basilica itself. It also displays the seals of the Knights of Columbus, who paid for the ombrellino; and the likeness of their founder the Venerable Father Michael J. McGivney the Jesuits who founded the parish more than 150 years ago, and the Sisters of the Holy Names of Jesus and Mary who founded and staffed the parish school for decades. 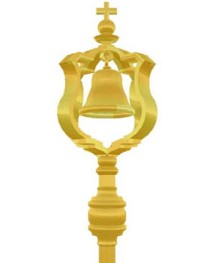 The gold bell mounted on a pole; the tintinnabulum also signifies the Basilica’s link to the Pope. In the Middle Ages, it served the practical function of alerting the people of Rome to the approach of the Pope during papal processions.

The total height of the tintinnabulum is eight-feet, six-inches.

The shape of the bell enclosure is based on the gold medal that Mary Immaculate Star of the Sea School awarded to valedictorians, which pays tribute to the work of the Sisters of the Holy Names of Jesus and Mary and the role of Catholic education in creating and sustaining the faith of the community.