“Everyone who listens to these words of mine and acts on them will be like a wise man who built his house on rock. The rain fell, the floods came, and the winds blew and buffeted the house. But it did not collapse; it had been set solidly on rock.” Matthew 7:24

Key West’s quintessential geography and geology secured viable habitation long before any notable human development both in the territory known now as the Archdiocese of Miami as well as in most of Florida.The Florida Keys are a narrow, gently curving chain of sub-tropical islands extending one hundred and thirteen miles from the tip of Florida to Key West, which is ninety miles north of Havana, Cuba. “Key” comes from the Spanish word, “cayo” which means ‘small island.’

To the south and to the east of Key West and the Florida Keys is the Atlantic Ocean which is held in check by the third largest coral reef in the world. This coral reef provides a natural harbor from the confluence of capricious ocean and sea currents, which have directed many to Key West willingly, and sometimes unwillingly, from the Atlantic Ocean, the Gulf of Mexico and the Florida Straits. The very name, Key West, is not merely an indication of geographical location, but it is a transliteration of “Cayo Hueso,’ a common name based on its geological appearance resembling the color of bones.

Unique to Key West is its geology of oolitic limestone in the surface, deep below the surface and rising beyond the surface. It is the perfect host for wells and cisterns to collect rain water. The wells are lined with concrete made from the oolitic limestone, which provided potable water protected from saline ocean water and bacteria. The providence of God’s creation in the unique geography and geology of Key West and the Lower Keys provided a viable dwelling for His creatures and thus stability for the development of peoples and for the propagation of faith.

The present Saint Mary Star of the Sea Church is literally built upon, and built from, this oolitic limestone rock. The Church building is of concrete made from an aggregate of limestone dug from the grounds and beach sand, which is of coral. Though the furnishings and the statuary within the Church have suffered through the ravages of time, tropical weather and termites, the Church building itself stands firmly upon this rock and, most importantly, upon the rock of Saint Peter. And on this rock was established, Saint Mary Star of the Sea Parish: 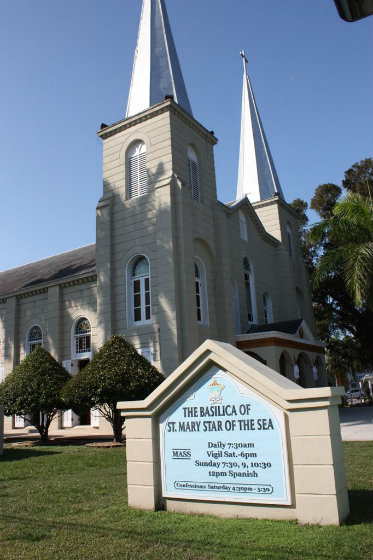